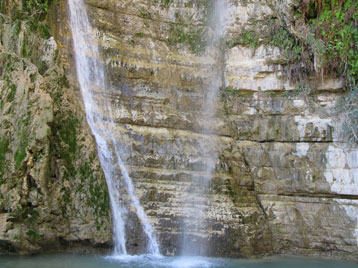 We start our journey towards the Dead Sea and Jericho driving East from Jerusalem and through the Judean Desert.

On our way, we shall visit a mosaic museum at the site of the “Good Samaritan Inn”, which was described in the gospel of Luke. Our next stop is at a date plantation in an Israeli Kibbutz, where Israeli agriculture utilizes advanced technologies in the salty desert.

From the modern Israeli settlement we go back to the ancient times and visit Qumran, where the Essenes (a Jewish sect of priests) lived more than 2000 years ago. It is believed that John the Baptist lived with them for a period of time. The most ancient copies of the Bible, written on parchment also known as “The Dead Sea Scrolls”, were found here.

The marvels of the Judean Desert are revealed at the oasis of Ein Gedi, where we will see the beautiful waterfalls and wild ibexes.

Our next stop is in one of the most popular and visited sites in Israel – Masada, declared ” World Heritage Site” by UNESCO where we shall hold an in-depth tour of the mountain. If time allows we shall go for a relaxing float on the salty water of the Dead Sea, a unique experience that you will take with you home.